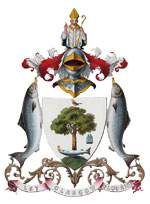 Glasgow’s Coat of Arms dates back to 1866 when the Lord Lyon first granted the city its patent.
The emblems depicted within the armorial bearings go back much further in history, representing legendary incidents in the life of the
city’s founder and patron saint, St Kentigern, or as he was more affectionately known, St Mungo, meaning “the dear one”.

The Tree That Never Grew
The tree in the coat of arms is a now sturdy oak tree, but it started out as a branch of a hazel tree. The legend says that St Mungo was in charge of a holy fire in St Serf’s Monastery and fell asleep. Some boys who were envious of his favoured position with St Serf put out the fire. But St Mungo broke off some frozen branches from a hazel tree and, by praying over them, caused them to burst into flames.

The Bird That Never Flew
This commemorates a wild robin which was tamed by St Serf and which was accidentally killed. St Mungo was blamed for the death but he is said to have taken the dead bird, prayed over it and it was restored to life.

The Fish That Never Swam
The coat of arms always shows the fish with a ring held in its mouth. This is because a King of Strathclyde had given his wife a ring as a present. But the Queen gave it to a knight who promptly lost it. Some versions of the story say that the King took the ring while the knight was asleep and threw it in the river. The King then demanded to see the ring – threatening death to the Queen if she could not do so. The knight confessed to St Mungo who sent a monk to catch a fish in the river Clyde. When this was brought back (presumably catching salmon in the Clyde in those days was a lot easier then!) St Mungo cut open the fish and found the ring. When the Bishop of Glasgow was designing his own seal around 1271, he used the illustration of a salmon with a ring in its mouth and this has come down to us in today’s coat of arms.

The Bell That Never Rang
In 1450, John Stewart, the first Lord Provost of Glasgow, left an endowment so that a “St Mungo’s Bell” could be made and tolled throughout the city so that the citizens would pray for his soul. The bell was still ringing out in 1578, as there is an entry in the City Treasurer’s accounts two shillings (10p) “for one tong to St Mungowis Bell.” A new bell was purchased by the magistrates in 1641 and that bell is on display in the People’s Palace museum near Glasgow Green.
In 1631, another bell was made, this time for the Tron Church (the steeple is pictured on the right), on which was inscribed the words “Lord, let Glasgow Flourish by the preaching of the word.” Whether Glasgow flourished with spiritual assistance or the hard work of its people (or both), there is no doubt that Glasgow, now the largest city in Scotland, (twice the size of the capital, Edinburgh ) has certainly prospered.

We look forward to welcoming you to the Argyll Hotel and Glasgow. 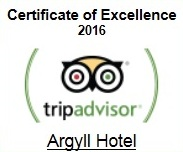